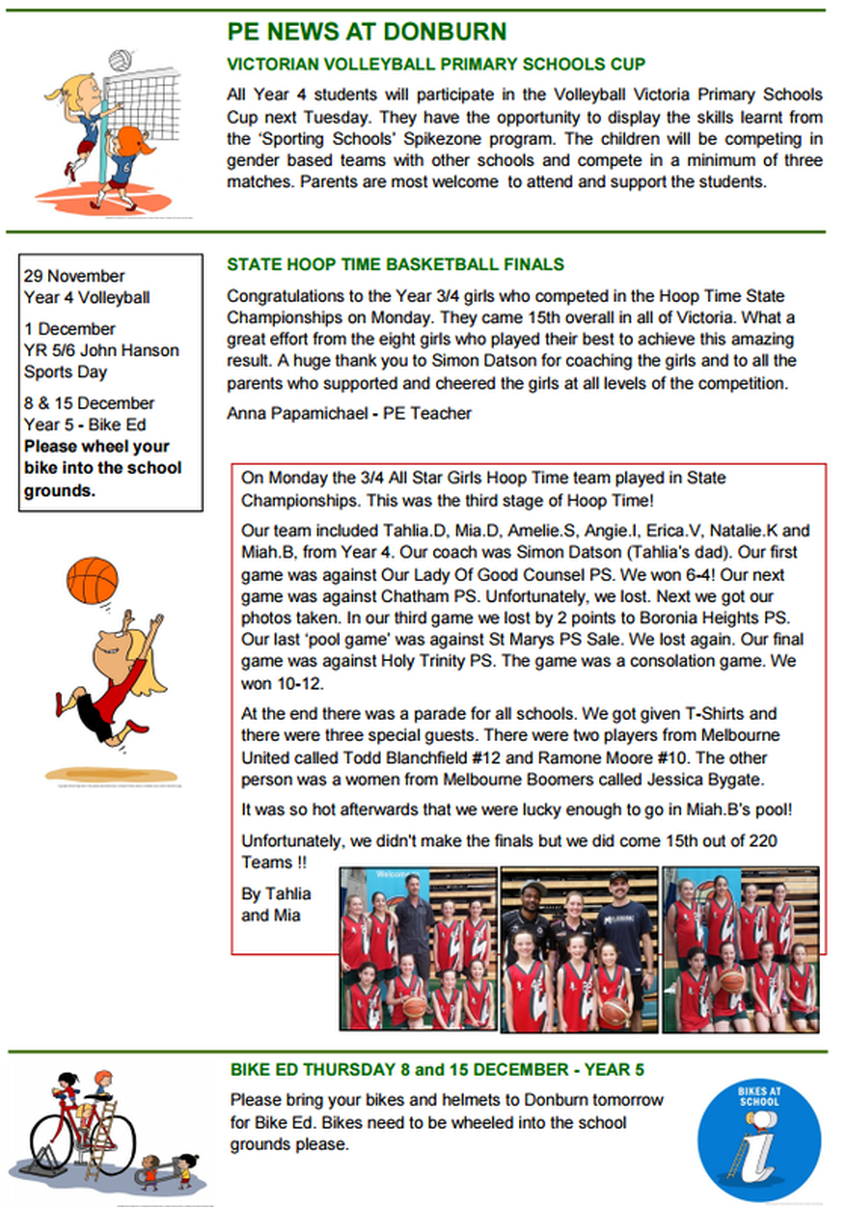 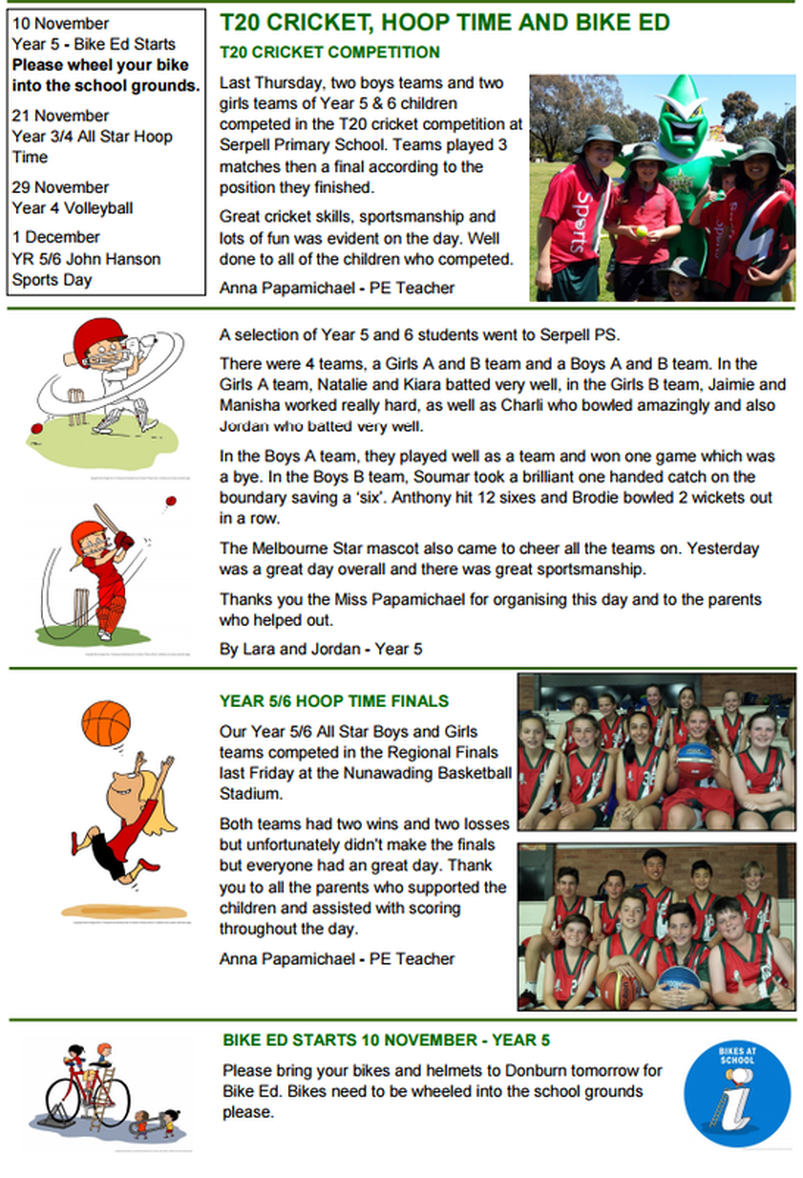 ​Our girls Year 3/4 All-star teams competed in the Regional finals at the Nunawading Basketball Stadium yesterday.
​The girls defeated four schools in their pool - Milgate PS, Kew PS, St Francis Xavier PS and Bayswater PS.
They then went on to play Holy Trinity in the finals, won in a close match and now will compete in the State Championship on 21 November.
A huge thankyou to both Carolyn and Simon Datson for coaching and managing the team.
The Year 5/6 Boys and girls teams will be competing in the Regional finals on Friday 4 November.
Regional Athletics

On Thursday, 13 October, 5 of our students competed in various events at ‘Eastern Metropolitan Regional Athletics
​at the Bill Sewart Athletics track. We had varied results with students performing as best as they could on the day.
Congratulations and well done to Ruby M, Ella B, Kaleb D, Tara F, Baran D and Bridget H. Excellent achievements by all!
Ruby progressed to the State Athletic Championships on Monday 24 October for both the 800m and 1500m races.
Ruby performed magnificently coming 3rd in the 800m and 8th in the 1500m out of all of the 12 year olds in the State of Victoria.
Ruby is now part of TeamVic for athletics competing in Sydney.
​Brilliant effort, Ruby!
Interschool Sport

Children in Grades 5 and 6 all participate in a range of summer and winter sports with other local schools during the year.
Sports played include Basketball, Bat Tennis, Cricket, Football, Netball, Newcombe, Rounders, Soccer, Softball & T-ball.

Students from Grades 3 to 6 are involved in House athletic sports (February/March and August/September) and a House cross-country event (May).  Successful teams and competitors have an opportunity to compete at Zone and then State levels.

House Swimming carnival is being held on Tuesday 16th February, whilst the Athletics carnival is held in September.
District Swimming Carnival

Twenty-nine children were selected from Years 3-6 to represent Donburn in the District Swimming Carnival
which was held at Doncaster Aquarena on Friday 19 February.
All competitors performed very well, placing our school third out of the eight in the Doncaster District.
A special congratulations to Harrison B, Mason P, Arthur K, Calum S and Phoebe R
who are competing at the Manningham Division next Monday. A brilliant effort!
Thank you to also to the following parents Nikki Healy and Stephanie Fua who assisted at the District carnival
​and all the other parents who supported and cheered on our students!
Summer Sport Update

Our Year 5 and 6 students will be competing in the first round robin tomorrow, Thursday 18th Feburary 2016.

​Most matches begin at 9:45am and are being played at the following venues:
Rounders & bat tennis - Donvale Primary School
Softball - Rieschiecks Reserve
Cricket - Donvale Reserve
Basketball - Bulleen Boomers stadium
​
Parents are most welcome to come and support the children.
Donburn Swimming Carnival

Tuesday February 16, 2016 was yet another fantastic Swimming Carnival at Aquarena!

Despite the gloomy weather the Donburn students in Years 3-6 represented their House Teams with pride, and showed great sportsmanship towards their fellow competitors. Well done, Anna, for organising such a wonderful event, and a huge thank you to all the parents who helped on the day.

The students should be very proud of themselves for participating in the various events, with a special congratulations to HOTHAM who won the carnival!

A huge thank you to all the parents who assisted with on the day as officials to ensure the carnival ran smoothly.
The school team was selected from the fastest 50m swimming times to represent Donburn in the District Swimming Carnival
​at the Aquanation Pool in Ringwood this Friday, 19 February.
Year 2 AFL Football Clinic

On Tuesday 9th of February, Year 2’s were visited by two elite football players from Collingwood Football Club.
Jamie Elliott and Adam Treloar shared stories about the AFL competition, training and diet and then taught us a few skills with a footy.

On Monday 8th February, all the Year 2s participated in a Hockey Clinic. Maria from Doncaster Hockey Club came to Donburn to teach us how to play. We learnt how to hold the stick and that you have to use the flat side to touch the ball and how to dribble.
​
Our favourite activity was playing the game ‘Spider’ because we tried to steal each other’s hockey balls! We all think we are hockey experts now and can’t wait to try hockey again! Thank you Maria for showing us so many great things.

This past Monday marked the start of our Term 1 Sport Clinics at Donburn.
The clinics were organised by Anna Papamichael through a government initiative called Sporting Schools.
The Year 4’s are doing softball and the Year 3 students hockey.
This week, the Year 3 students have been working on their hockey skills with their classroom teachers
and coach Emily from the Melbourne Sports Institute.
Clinics include a range of skill building activities and finish up with a quick game to cap off the fun.
We look forward to continuing the sessions for the rest of the term.